Scholar-Bureaucrats and the Making of the Early Modern Ottoman Empire: Bearers of Authority, Legitimacy, and Expertise

In the pre-modern Ottoman Empire, a large group of Muslim scholars, specialists of Islamic religious knowledge, constituted a significant branch of the Ottoman bureaucracy. In addition to participating in the transmission of religious knowledge and providing religious guidance, these scholars acted as the agents of the sultans’ government, serving as judges, financial officials, administrative investigators, diplomats, etc. They pursued a career in government service, climbing up a ladder of hierarchically organized positions with regular promotions. The functions they fulfilled and the form of their relationship with the government distinguished these scholars from their predecessors and their contemporary colleagues. They were a unique group, and deserve a unique label: “scholar-bureaucrats.”

Muslim scholars traditionally claimed the moral authority in the Islamic world and usually esteemed independence from the ruling authorities. For this reason, their incorporation into the government was a significant development. It was a gradual process and had many ups and downs and turning points. From the second half of the fifteenth century, many factors, such as the construction of largescale educational complexes, the institutionalization of the state, international developments, and scholars’ increasing desire to participate in the government, dynamically interacted and brought about the rise of the group of scholar-bureaucrats.

In terms of research, Dr. Atçıl is particularly interested in questions of law, religion, and politics in the early modern Ottoman Empire. His first book, Scholars and Sultans in the Early Modern Ottoman Empire, details Muslim scholars’ transition from independent and cosmopolitan actors to scholar-bureaucrats. His other published work is devoted to addressing issues, such as the Ottoman-Safavid conflict, scholarly mobility and theology and philosophy in the Islamic legal tradition.

Dr. Atçıl is currently working on two projects: The first, funded by the Scientific and Technological Research Council of Turkey-Career Development Grant, uses social-network-analysis technologies to examine the professional and intellectual networks of over 750 high-level Ottoman scholar-bureaucrats in the period 1470–1650. The second, funded by European Research Council-Consolidator Grant, investigates the formation of law in the Ottoman Empire between 1450 and 1650. Examining the religio-legal opinions (fetva) of scholars and decrees of sultans (kanun), it aspires to develop a model of lawmaking that will account for diversity and change in early-modern societies.

Turkey and Europe: Issues and Challenges

In a recent comment, the Turkish President Recep Tayyip Erdogan said that Turkey desires to “turn a new page in its relations with the EU in the new year,” in a message addressed to the European Commission President Ursula von der Leyden. According to him, the new year would offer a positive atmosphere in terms of new cooperation not only in the field of migration as was the case since the signature of a deal between the two sides in 2016. There is a desire in Turkey to update the Customs Union, to get visa liberalization for Turkish citizens, and to reopen the membership negotiation.

In the same statement, the Turkish presidency said that “mutual trust should be restored” between Turkey and Europe but at the same time reproaching some European member states with “creating caprices” that creates artificial problems.

Last year, tensions between the EU and Turkey escalated around different issues such as the Eastern Mediterranean crisis, the situation in Syria, and the Nagorno Karabagh, among others.

The announcement made by Erdogan coincides with the presidency of Joe Biden that promises to have some impact on the Middle East, Turkey, and Europe. To what extent there is a correlation between Turkey’s change of tone vis à vis Europe and the departure of Donald Trump from the White House? Does the new US presidency offer good chances to resolve the numerous crises that exist between and Europe? To discuss the various challenges and issues between Turkey and Europe, we have invited to our seminar two prominent scholars, Sinem Nas and Sinem Akgül Açikmese.

The Coal Heavers’ Strike in Istanbul (1910): A Case Study in the Politics of the Constitutional Period

In the autumn of 1910, coal heavers in Istanbul, more than a thousand men, predominantly Kurdish, went on strike. Disrupting sea transportation in the capital and leading to the unlawful police detainment of ringleaders, the strike turned into a major incident that elicited a variety of political responses. Focusing on this strike as a case study, this presentation examines the political sphere in general and the politics of labor activism in particular as they existed at the turn of the twentieth century in the Ottoman Empire.

The presentation will first reconstruct the history of the strike through sources produced by a variety of state and non-state actors. Approaching the strike as a field of contestation in which various actors were pitted against one another, it will address not only the specific labor issues involved but also broader problems in Ottoman society that the strike made visible, including those of political economy, freedom of expression, and intercommunal relations. Thus this presentation aims to contribute to recent discussions about why, in an age in which coal was a driver of the global economy, labor activism in the coal sector did not turn into a broader democratic movement in the Ottoman Empire.

As a second goal, following various scholars’ calls in recent decades for the issue to be brought into the study of labor history, the presentation seeks to examine the central role that ethnicity played in the labor activism of the Second Constitutional Period, both in discourse and in politics on the ground. It thus aims to address broader historiographical concerns, particularly the challenge of writing about the working classes who went largely unrepresented in urban politics and the limits such lack of representation places on our ability to understand the wider politics of the era. 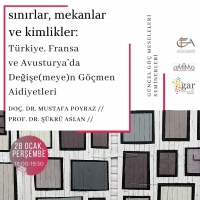 Turkey-US relations has been on a roller-coaster since the end of the Cold War. Despite the rhetoric of strategic partnership or model partnership, the two sides have failed to develop a strategic framework to add a new lease on life to their alliance. In the absence of a shared strategic vision, transactionalism became a frequently preferred method in dealing with each other on issues of mutual interest. The unravelling of the Liberal International Order eroded, on the other hand, the norms and values that were supposed to complement this interest-based alliance. While President Trump’s term in office hasted the erosion of these norms and values, his way of conducting the US foreign policy facilitated de-institutionalization and eventual personalization of the US’ relations with Turkey in the last four years. His un-conventional style provided Ankara with greater degree of autonomy in pursuing a foreign policy agenda that defied substantially Washington’s regional and global priorities. His succession by Joe Biden may mark a return to pre-Trump era foreign policy choices, practices around values, norms and institutions. Ankara has already signalled its readiness to moderate its policy choices and practices, the prospects for salvaging the US-Turkey alliance in the near future are slim for three reasons. First and foremost, the alliance with the US represented the ultimate choice in the early Cold War era for the late Ottoman/early republican elite in their pursuit of Westernization for survival. The very idea of Westernization does not sit as well with new Turkish political elite. Their approach to the “West” is pragmatic and transactionalist rather than institutionalist. Second, Washington and Ankara have pursued competing and conflicting interests in the immediate vicinity of Turkey, namely the Black Sea and the Middle East. While their interests in the former might be more amenable to reconciliation due to Russian revisionism, their differences in the Middle East are more fundamental and involve the JDP’s bid for regional primacy. Finally, the institutional aspect of their relationship collapsed after the US invasion of Iraq in 2003. The Turkish Parliament’s refusal to allow the US troops to be deployed in and through Turkey broke (probably irreparably) the special relationship between the Pentagon and the Turkish General Staff. This special link has yet to be replaced to put the alliance back on its feet.

Dr. Serhat Güvenç is a Professor of International Relations at Kadir Has University, Istanbul where he teaches graduate and undergraduate courses on Strategy, Turkish Foreign and Security Policy and Turkey-EU Relations. Recently his research focus has shifted onto Maritime Security in the Black Sea and the Mediterranean. He, therefore, currently supervises masters’ thesis and doctoral dissertations mostly on maritime security and related topics. His areas of expertise are Turkish Foreign Policy, Turkish Defense, EU-Turkey Relations, Turkey-Greece Relations Naval and Maritime Security in the Eastern Mediterranean and the Black Sea. Previously, he served as the Associate Dean of College of Economics, Administrative and Social Sciences and the Chair of International Relations Department.

Majored in international relations and political science in Marmara University, Mehmet Ali Tuğtan has completed his MA in 2000 with the dissertation titled Emergence of A Post Cold War European Security Architecture and his PhD in 2007 with the dissertation titled Turkish-US Security Relations 1945-2003: A Game-Theoretical Analysis of the Institutional Effect in Boğaziçi University Political Science program.

Dr. Tugtan’s areas of study include Turkish-American Relations, Contemporary World Politics and Security Studies. In addition to several book chapters and articles on these subjects, Dr. Tugtan has edited a book on the Turkish involvement in the Korean War (Kore Savaşı: Uzak Savaşın Askerleri) published in 2013.

For Massive online open course projects of Dr Tugtan on his areas of study, see:

The Nagorno-Karabakh War, Turkey and the new regional dynamics after three decades

After forty-four days of war between Armenia and Azerbaijan in Karabakh, parties have signed a ceasefire agreement which has ended the 2020 Nagorno-Karabakh War and Russian troops have been deployed in the conflict zone. The fighting was the worst it has been since 1992 and encompassed the entire scope of interaction, with artillery, missile, and drone strikes deep past the Armenian lines. This war featured modern weaponry, representing a large-scale conventional conflict between these two states which has changed the long-standing delicate status quo. Due to its recent regional protocol driven by assertive policies, Turkey has been recognised as an influence looking to realise its interests through involvement in this conflict. Turkey is backing Azerbaijan and has reiterated its support to Azerbaijan against Armenia. President Recep Tayyip Erdogan condemned the Armenian occupation of Azerbaijani territory, and called on Armenia to stop its aggression and withdraw from the land it is occupying in Azerbaijan. There is a feeling that Turkey, together with Russia have benefited from the conflict and the resolution effort. This seminar aims to analyse the new security dynamics in the Caucasus, centering on Turkey’s role and interest, as well as the potential of Turkey as a regional power, to ensure security and stability in the region.