Covid-19, surging dramatically around the world in the first half of 2020, categorically impacted Turkey in many regards, not the least of which being its already frail economy. Despite various negative occurrences and political actors’ curious professions of the nation’s dearth of assistance for its own citizens Turkey offered support for numerous countries. It supplies healthcare to more than 70 foreign countries through its own hyperactive transnational state apparatuses. Notable among the institutions providing the assistance are the Presidency of Religious Affairs (Diyanet İşleri Başkanlığı, Diyanet), Turkey’s domestically and internationally controversial religious institution, and the Turkish Diyanet Foundation (Türkiye Diyanet Vakfı, TDV), the Diyanet’s branch tasked with distributing foreign aid. The Diyanet and the TDV delivered this assistance with written materials from the president of Turkey to Muslim countries such as Bangladesh, Mauritania, and Yemen, and to Muslim-majority countries with which Turkey shares historical bonds in the Balkans and North Africa. From these activities of Turkey, one should ask these questions; what is the role of religion in these humanitarian aid activities? Can we read all of these activities as a religious soft power or are they serving another multidimensional leadership desire for the New Turkey?

Biography: Ahmet Erdi Öztürk is lecturer of politics and international relations at London Metropolitan University. Between 2021-2023 he will work as Marie Sklodowska-Curie fellow at Coventry University in the UK and GIGA in Germany. He was a Swedish Institute Pre and Post-Doctoral Fellow at Institute for Research on Migration, Ethnicity and Society (REMESO), at Linköping University, Scholar in Residence at the University of Notre Dame's Kroc Institute for International Peace Studies. He is the author of more than 20 articles, co-editor of four special issues and two books on religion and politics and Turkish politics. He is a regular contributor to media outlets such as Open Democracy, The Conversation, Huffington Post and France 24. 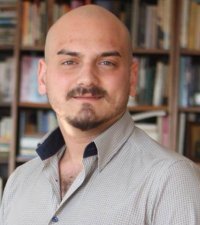