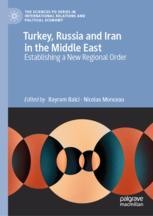 This book explores the complexity of the Syrian question and its effects on the foreign policies of Russia, Iran, and Turkey. The Syrian crisis has had a major effect on the regional order in the Middle East. Syria has become a territory where the rivalry between Russia and Western powers is being played out, and with the West’s gradual withdrawal, the conflict will without a doubt have lasting effects locally and on the international order. This collection focuses on the effects of the Syrian crisis on the new governance of the Middle East region by three political regimes: Russia, Iran, and Turkey. Many articles and a number of books have been written on this conflict, which has lasted over ten years, but no publication has examined simultaneously and comparatively how these three states are participating in the shared management of the Syrian conflict.