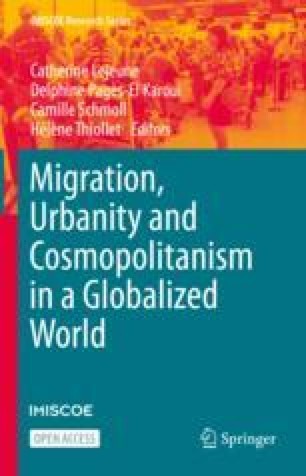 Franck Mermier, "Urban Cosmopolitanisms in the Arab World: Contribution in the Theoretical Debates", in Catherine Lejeune, Delphine Pagès-El Karoui, Camille Schmoll et Hélène Thiollet (dir.), Migration, Urbanity and Cosmopolitanism in a Globalized World, Cham (Suisse), Springer, 2021, pp. 55-65. https://doi.org/10.1007/978-3-030-67365-9_5
The notion of cosmopolitanism has been the subject of many definitions and has attracted renewed interest in the context of globalization. Cosmopolitanism, however, in a sociological perspective, has two main meanings. It can refer to the skills of individuals who are able to move between different worlds precisely because of their cosmopolitan cultural capital. It also refers to the ethnic, cultural and religious plurality of cities, some of which may be more cosmopolitan than others. The two seem inseparable since the degree of cosmopolitanism of an urban space is also a function of its capacity to absorb external influences through its inhabitants. This article focuses on the forms of urban cosmopolitanism present in the Arab world and their relationship to the type of urbanity specific to each city. In particular, it discusses how this notion has been used to analyze urban realities in highly differentiated historical and cultural contexts, raising the case of Aden under British occupation. By highlighting the plurality of forms of cosmopolitanism within a cultural area, this study aims to question its definition on the basis of this criterion and to contribute to the comparative study of urban societies in a context of globalization.